Recruiting & Retention Part 1: It Starts with the Money 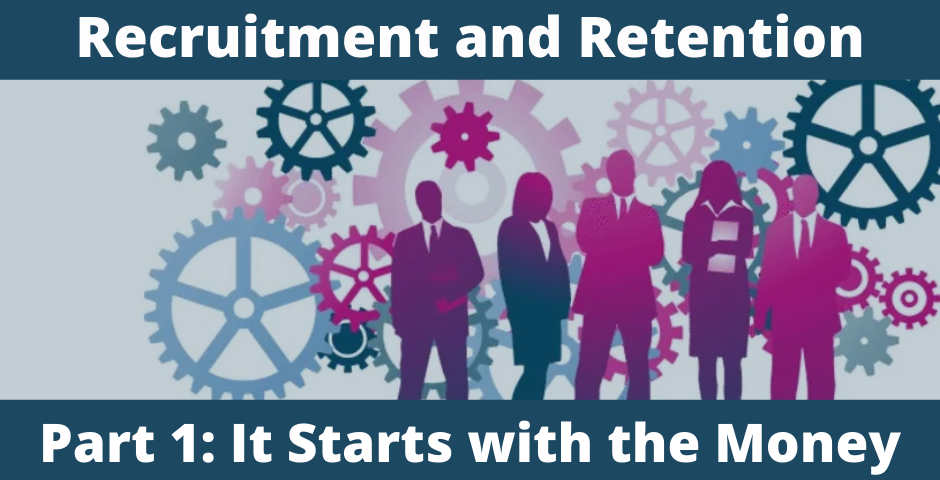 Recruiting new team members and retaining those already on board has long been the bane of existence for HR managers. We’ve been talking about it for so long you would think we’d have formulated the right answers by now. And yet, businesses of all sizes still struggle.

Things are made worse now by the Great Resignation. But in that mass exodus of workers over the last 18 month, there are lessons. Here’s the first one: recruiting and retention always starts with money.

Not Worth the Pay

Data cited by the World Economic Forum suggests that a large percentage of the 4.4 million workers who left their jobs last September did so because they were “no longer willing to put up with the working conditions and pay accepted prior to the pandemic.”

The uncomfortable truth is that employees constantly compare what they earn against what they do. And in many cases, they don’t feel like they are earning enough to justify their hours, working conditions, workloads, etc.

While the average salary in the U.S. is just under $83,000 per year, roughly 73% of all working adults make between $50,000 and $54,999. Your typical worker looks up and sees a small handful of people through that glass ceiling, people who make six and eight figures. Whether or not upper management deserves such high salaries is not the point. The point is that perception makes a difference.

The first step in hiring and retaining quality employees is making them feel as though their pay is commensurate with their work. There is no way to sugarcoat it. Millions of Americans have made clear their dissatisfaction with pay by walking off the job. Companies have to change their perceptions one way or another.